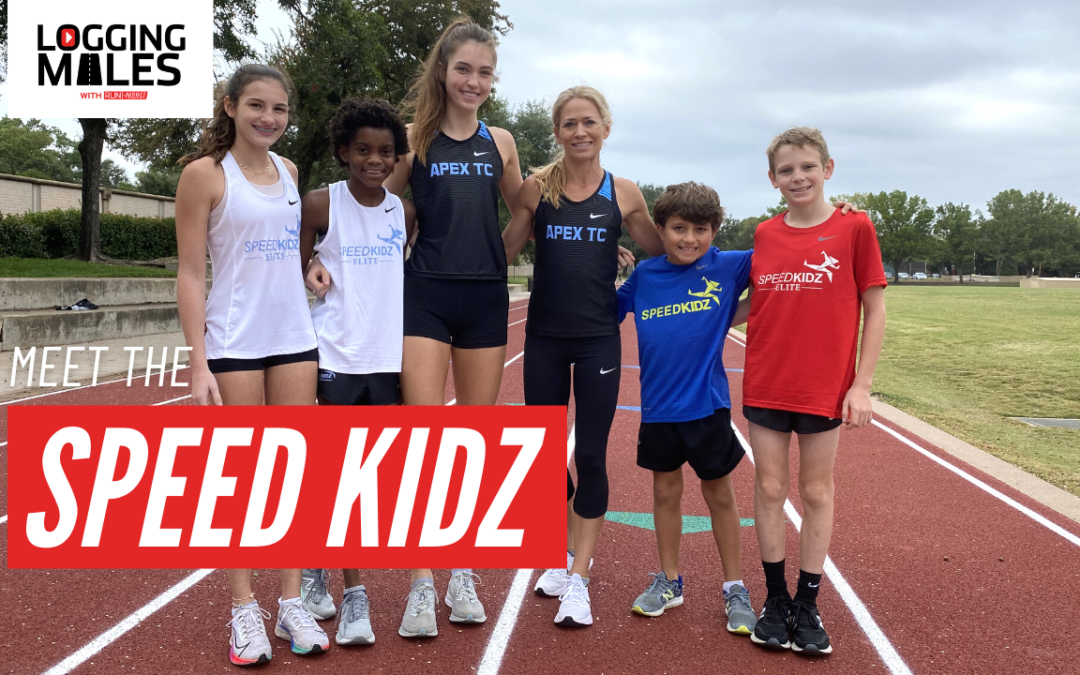 An interview with Dawn Grunnagle and Ryan Reynolds

Have you ever been in the middle of a race, and you’re feeling pretty good about your time? You’re like “Yeah I’m hitting all my goals.” Then suddenly you have some eight-year-old like pass by you. It feels like you’re standing still, and you’re like “How are they doing that?” “Their legs are two feet long, and I’m a full-grown adult.” Well, I think that I have found the person who Is responsible for creating these many monsters.

Dawn Grenegal is the founder of a kids running group and coaching program called SpeedKIDZ. She teaches kids as young as four years old how to run safely, properly, and really freaking fast. You know that saying about how people “can’t do, teach” that is not the case here. Dawn is really fast, and when you watch her run, she makes it look like running is no big deal.

First, let’s learn a little bit about Dawn. Then I will introduce you to some of the kids.

Dawn: Yeah, so I grew up with five brothers. We played basketball. That was my sport until middle school and high school. I actually played through high school until my sophomore year. I started running track in eighth grade just because my friends were doing it. I was a sprinter my first time out as a runner. Then, as I developed in high school, I got put into this one-mile race. I ended up winning it. That’s how I became a middle-distance runner. At the time I learned that you could get a scholarship for running. No one in my family had gone to college, and I was like that’s what I’m going to do. I just focused completely on getting a scholarship. Once I learned I could get a scholarship and the times I had to hit, that’s what I did. I just ran.

Ryan: When did you get into teaching? Is it something you fell into?

Dawn: I always wanted to be a teacher my whole life, and so I did that in college. My degree in Interdisciplinary Studies. I taught for ten years after I graduated. I stopped running for a little bit and just focused on teaching. Then, I started competing and running again. I was already training athletes like speed agility on the side. You can’t leave your second or third-grade classroom on a Friday or a Monday to compete in another state. I learned I needed more flexibility. That’s when I launched the program Speedkidz. I already had a ton of girls I was coaching, so that became the team. It actually started with all girls. The idea behind Speedkidz was developing the all-around female, not just through running but through community service, through giving back, through leadership. You know it’s not just the running part. It’s great if you’re fast, but you need to be an all-around athlete.

Ryan: Okay, so I don’t have any kids, and that’s probably a good thing, but if I did I would want to know what a good age would be for them to start running.

Dawn: I think as soon as they start walking, kids can start running. If you ever look at a toddler or a kid that starts to run or walk, they have the best running form. They’re up on their toes. They have the best running form. They actually learn bad habits as they get older. That’s really the vision we have on our team, not developing those bad habits, learning good technique, good running form. That’s why we do the running drills that we did earlier and learning all those techniques early on to make sure that you’re able to develop your skills. If you do want to run at the middle school, high school, collegiate or even professional level, you already have that base when you’re younger.

Ryan: Okay now let’s meet some of the SpeedKIDZ.

Ryan: What goes through your head when you’re running?

Kidz: I think about what I’m going to do that day. That I can feel accomplished when I am done.

Dawn: I like to do it based on grade. If you’re in second grade, then maybe you do once a week, like a two-mile run. If you’re in third grade, once a week, a three-mile run then your other runs are going to be all shorter. I think running fast and running speed, developing speed first is the most important up through middle school at least. You can always build endurance.

If you have your athlete who’s like a fifth-grader running a 10-mile run, I don’t generally recommend that. I would say five miles would be the max for a fifth-grader and once a week. You wouldn’t do that every day.

Ryan: From the viewpoint of a triathlete who is naturally obsessed with gear, what I’m wondering is what a kid really needs to get started running?

Dawn: A good attitude and being an encouragement to others that are around you. I think it’s more of a mental state rather than having equipment. My first pair of shoes were fake Keds from Walmart. I think they need proper running shoes, but I would say stick to the flexible ones. I don’t recommend kids having any kind of running plate in their shoes. I think the more flexible the shoe the better. In fact, if you have little kids like not school age kids yet, I think running around barefoot is the best. I suggest no shoes if you can do it. It helps to strengthen their feet as athletes.

Ryan: Now you know where these mini powerhouses are coming from, the next time you are racing in the Dallas Fort Worth area and you get passed by a kid you might have Dawn to thank for that. I can’t even imagine what these kids will be like when they get to adults if they keep running. It’s just crazy to think about and it really makes me wish that I had had a coach like Dawn when I was that age but I was in theater.

Now, do you have any questions for Dawn?

Do you have any questions for me?

All you have to do is put them down below in the comments, or you can send them straight to me at ry@runproject.org.