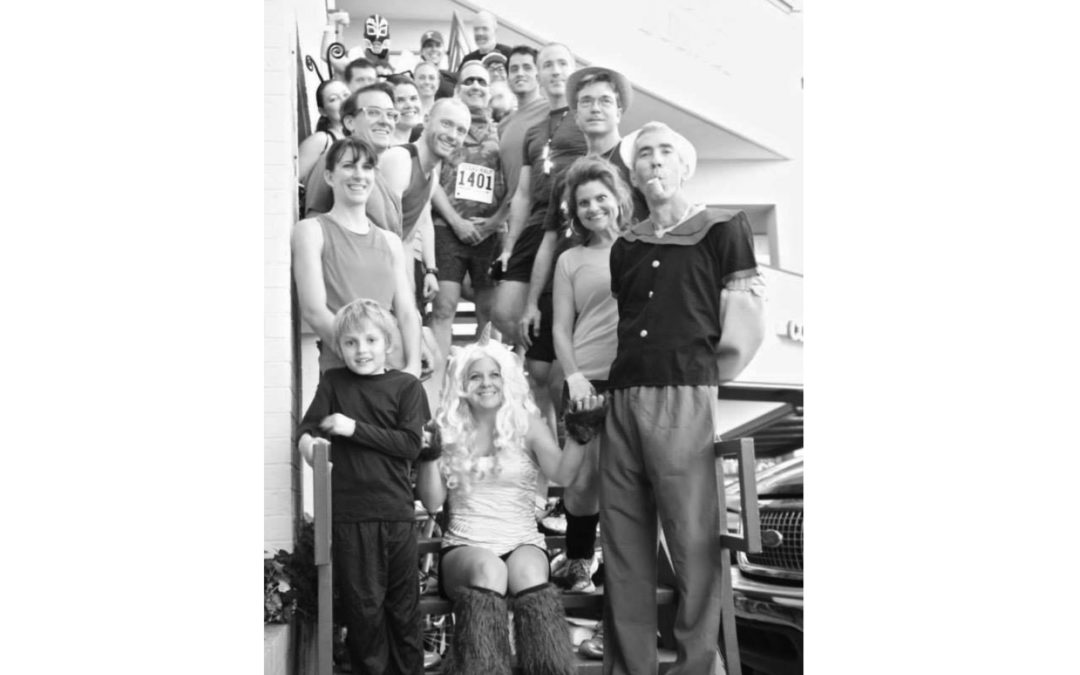 According to the Guinness Book of World Records, the fastest marathon in a four-person costume was run in September 2018, when a group of Brits covered 42K connected as a caterpillar in just 4 hours, 3 minutes, and 18 seconds.

Halloween is upon us and, even if you’re not planning to set a World Record or run a full marathon in kooky costume, there are numerous occasions to jump into a spooky social run or themed race this month in North Texas.

But, planning the right getup takes special consideration. For one, it’s hot. Still. On top of overheating, there’s the question of chafing and tripping.  And, that’s not to mention cost. Even discount store costumes can be expensive.

We’ve got you. Bearing in mind the unending heatwave and other peculiarities of running in costume, here are 9 options you can make at home with a little ingenuity and mostly basic thrift store ingredients.

Steve Prefontaine: If you can grow a mustache (or easily find a stick-on one) and longish hair, that’s basically all you’ll need for an unmistakable sendup of the bad boy of Olympic track stars. Throw on a pair of short green shorts and a white tank top. Then head to a craft store for iron on letters for the final touch. Outfit your shirt with “Oregon,” “U.S.A.” or “Stop Pre” — any of the three will do.

Florence Griffith Joyner:  It will take effort to achieve this distinct lewk, but honoring FloJo is oh-so-worth-it. Use an old pair of tights – if you have time, search for a pair in dayglo green or an animal print – and cut off one leg. Match your tights with a tank top and add a pair of bright bathing suit briefs in a contrasting color on top. Puff your bangs, put on pretty eyeshadow and lipstick, and go for long, elaborately painted nails to look like this 1980s superstar.

Joan Benoit Samuelson:  You won’t need much to pull off this 1979 Boston Marathon champion’s iconic winning look — though sexy biceps would help. Iron “BOWDOIN” in white, curved all-caps onto a black singlet and pair with a backward Boston Red Socks cap, twisted askew as if you can’t be bothered with such details. It’s an easy enough look to achieve; Benoit Samuelson herself recreated it during this year’s race when she honored the 40th anniversary of her win by running within 40 minutes of her winning time. (She ran 2:35:35 in 1979 and handily earned first in her age group with 3:04:00 in 2019).

Classics with a Runner’s Spin

Injured Skeleton: A black bodysuit with bones is a no-brainer. It’s perfect for maximum mobility. If you’ve got a good sense of humor about runners’ common physical complaints, you can even draw on a stress fracture or add red paint to simulate shin splints.

The Ghost of Marathons Past: Sure, it’s hard to find a bed sheet made from moisture-wicking material, but if you’re taking your run easily, there are fewer ideas less low-maintenance than an old-school ghost. Get creative by writing on former finishing times with a Sharpie or other bygone race relics – the cities or states in which you’ve run, for example — and you’ve got the Ghost of Marathons Past.

Taper Madness: Marathon runners turn into monsters, usually about three or two weeks out from their goal race when training plans slow, but anxiety remains high. Take a cue from Michael J. Fox’s Teen Wolf basketball player. Pair regular running clothes with a hairy wig, long claws, and pointed fangs. Carry a bag of chips (or another junk food for nervous binging) and obsessively pull out the 10-day weather forecast for anyone who will listen.

The Bride:  Uma Thurman’s unstoppable assassin in Kill Bill memorably wore a yellow tracksuit when seeking revenge against Lucy Liu’s O-Ren Ishii in a snow-covered garden in Okinawa. If you can find tights and a jacket in that hue, this one’s easy. Top it with long, blonde locks and wield a katana sword.

Paulie Bleeker: Michael Cera left a lasting impression as a hapless track runner and soon-to-be teenage dad in Juno. Capture his beloved look with yellow shorts and sweatbands, a burgundy t-shirt (even better with the “Dancing Elk Condors” logo if you can splurge on one) and tall tube-socks.

Rocky Balboa: Recreate this iconic movie look in one of two ways: If it shockingly turns out cold for your run, pair gray on gray sweatshirt and pants with black high-top Converse shoes, a red sweatband and a gold crucifix. If it’s hot, pair American flag shorts with red gloves and a championship belt.

Forest Gump: If you “just feel like running,” toss on red shorts, a white shirt with a bold Nike logo, a red cap and tall tube socks. That sounds easy, but finding the right wig/beard combo is what really sells it. Perhaps start growing your own locks, like, yesterday.