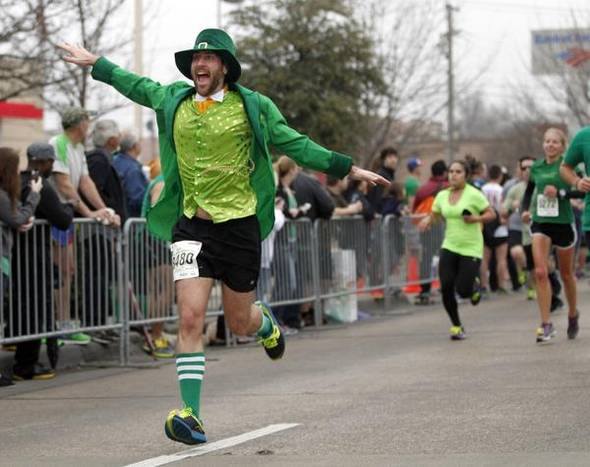 I ran my first Dash Down Greenville in 2012. It’s a year fans of the Greenville Avenue parade that follows the 5K run may remember. After 30 years, the annual St Patrick’s Day celebration that brings out more than 100,000 people to line the two-mile parade route was in jeopardy. The event was without a sponsor. The Dallas Observer had pulled out, taking Budweiser with them. Organizers announced they needed $40,000 in donations or they would be forced to cancel the parade. Enter Mark Cuban, owner of the Dallas Mavericks. A year after bringing an NBA championship to North Texas, Cuban rescued one of the largest St Patrick’s Day celebrations in the US, and his Dallas Mavericks remain today the largest sponsor of the 40th Annual Dallas St. Patrick’s Parade & Festival that follows the 5K. The race’s connection to the parade and all-day festival is special. They share a course. They share spectators. They share an energy and enthusiasm that is uniquely Dallas.

This year will be my eighth year running Dash. I’ve run through injuries. I’ve run it in costume—three times dressed as a leprechaun. I’ve run it as a PR. And I’ve run it with a beer in hand. That’s the beauty of the Dash Down Greenville 5K—it is what you want it to be. A fast course? Check. Lined with crowd support the length of Greenville and through the neighborhood too? Check. Parade-goers come out hours early to guarantee a good spot and enthusiastically cheer for the runners who provide early morning entertainment for the day-drinking tailgate. For those elites who lead the pack through the 3.1-mile course, there’s prize money—something rare in North Texas 5Ks these days. For the rest of us, there’s plenty of beer. And music provided by a live band. And friends. And beer. And runners dressed in costume. And beer. And all the thousands of parade-goers who’ve come to Greenville early to secure their spot on Greenville.

So why does Dash Down Greenville belong on every runner’s bucket list? Because it’s a party. From gun time at 8:00 AM to the parade start at 11:00 and on into the afternoon with the festival. No other post-race party compares. And no other city in the Southwest does St. Patrick’s Day quite like Dallas. Come for the run. Stay for the parade. Celebrate all day. You’ve got Sunday to recover. Consider stopping by the party supply store on your way home this week and buying a green wig and tutu. You’ll fit right in. Maybe cover your face in glitter and streak your hair bright orange. This is one day in Dallas you won’t regret it. Or maybe you won’t settle for less than running a 5K in a full-on leprechaun costume. I support that. This is your Kodak moment and Dash Down Greenville is your party.

I was fired up the first time I donned an overcoat and top hat for my first Dash in leprechaun costume. I’d even worn it to a social run the week before for a trial run, which I strongly encourage. It was a simple ensemble: polyester shirt with shamrock print, green overcoat and top hat. My race bib was pinned across the front of my shirt like any other runner. I wore my normal black running shorts and green socks pulled up to my knees. The coat flapped in the wind behind me and I had to clutch it most of the run to keep it on, but thankfully the top hat fit well around my head and stayed with me across the finish line where event photographers snapped my picture like excited paparazzi. I’ve recycled that costume at least twice since then, running three of my eight times dressed as a leprechaun. There are pictures to prove it.

If you’re running Dash Down Greenville this year—in costume or not—I have a few tips to run Dash like a pro:

Register for Dash Down Greenville