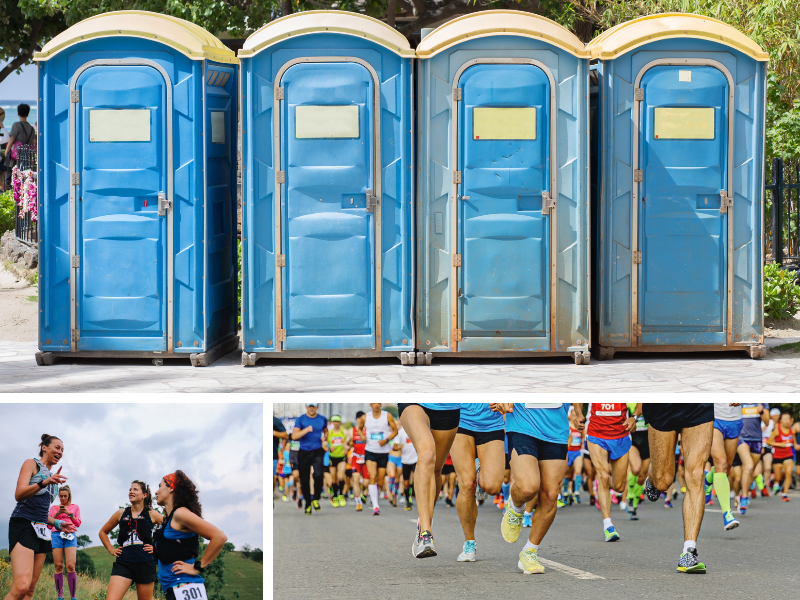 By Kim Daly Farrell, CHC, and CEO of Mama Love

What do runners talk about most when they get together with other runners? Running, duh.

When two or more runners hang out, you’ll hear all about their last runs—whether you’re interested or not. But the conversation isn’t all split times and play lists.

Nope, runners aren’t afraid to get personal (and sometimes downright disgusting) with their weird groin pains, gastro issues, and more. I know, because I spent most of my twenties chatting with other runners on group runs, in porta potty lines, in relay vans, and at post-run happy hours.

I eased up on the miles to have babies in my thirties, and now that I’m back on the scene hanging out at race expos in my forties, I’m hearing the same topics and questions all over again. And frankly, I’m curious to get to the bottom them, so I dug into the research and recruited a few of my expert friends to help. Here are three of the weird body issues runners talk about most—solved.

A lot of runners have experienced this phenomenon, and it typically happens around the 2-mile mark—when you cross that threshold of casual jogging to distance running. But what exactly is that burning sensation?

“It’s most likely chaffing,” says Brooke Jackson, M.D., a marathon runner and dermatologist in Durham, NC. Your running shoes might be tied to tightly, or you might need to go for a pair that’s one-half size larger than would in other shoes. If you ignore that friction on your feet, you’re headed for Blisterville.

Aside from roomier kicks, there are a couple of other things you can do to keep your skin happy. “Buy running-specific socks that hug your feet,” says Dr. Jackson, “because blisters can also be caused when they bunch up inside your shoes.” For long runs, she also recommends coating your toes and soles with Aquaphor, “to reduce potential hot spots.”

The need to hit the nearest Starbucks or, in a desperate situation, an especially bushy area along the route, is very common—research shows 20-50% of endurance fitness enthusiasts experience bowel issues while exercising. The culprit? Blood flow.

When running, your body diverts blood to the muscles needed to propel you forward and away from the digestive tract. That blood flow shift puts pressure on your gut to either get rid of what’s inside fast or hold onto it—so, you either get the runs, or find yourself constipated later.

The best way to avoid a poo-nami on your next run: Watch what you eat right before you lace up. Steer clear of foods high in fat and fiber within an hour prior to your workout (so, no bacon or oatmeal), and consider limiting your dairy intake, as running has been shown to exacerbate lactose intolerance and dairy sensitivities.

Nope—unless you’re looking for a reason to stop, your body is not allergic to movement. That weird itchy sensation is caused by your skin mishandling its response to sweat. Basically, your circulatory and exocrine systems are talking fast, and your immune system isn’t keeping up with the conversation.

Blood is flowing to your muscles to keep you moving, and as your body temperature rises from the exertion, some of that blood gets diverted to the skin to activate your sweat glands. Gland activity ramps up, and your pores release sweat to help you cool off. Those beads of moisture then trigger an immune response on the surface of the skin, in the form of redness, inflammation, and itchiness.

“For most exercisers, the itch doesn’t last long,” says Jordan Metzl, M.D., a sports medicine doctor at the Hospital for Special Surgery in New York City. And the more fit you become, the less likely you are to experience the phenomenon, he adds.

Still, it tends to happen more often in cooler temps, “because it’s harder for sweat to escape through extra layers,” says Dr. Metzl, which explains why even seasoned runners feel the itch sometimes.

Kim Daly Farrell is a certified health coach, former magazine editor, 3x marathon finisher, and mom to two amazing kiddos. She has worked for national media outlets, including Good Housekeeping, Glamour, and Shape; and health industry leaders, including MyFitnessPal and Fitbit. Today, she calls the shots as founder and CEO of Mama Love LLC, a plant-based sports nutrition company.