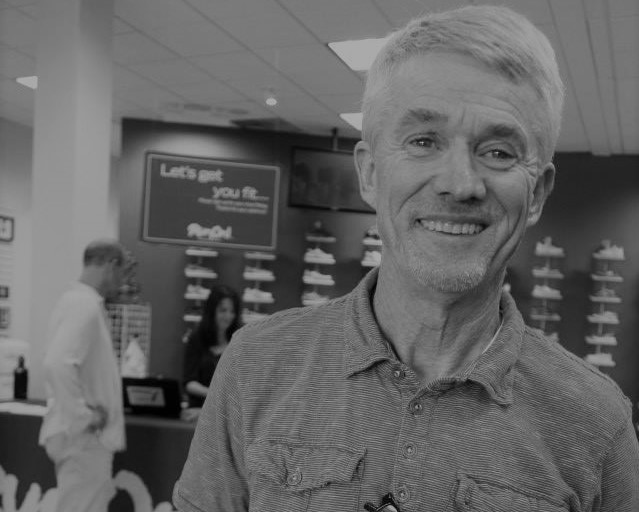 Robert (Bob) Wallace was the co-owner and co-founder of Racing Systems, the parent company to Run Project as well as the local running stores Run On!. He passed away on July 21, 2020. He was a friend, mentor, and coach, to many in our community. We are sad to lose this local running industry legend and our dear friend. He was such a strong figure in our lives and his impact will be cherished.

Robert Wallace was the king of sarcasm and self-deprecating humor, which makes a sentimental tribute feel out of character. Yet those who had the opportunity to be part of Bob’s life from June 21, 1951 to July 21, 2020 want to shout from the peaks of every 14er he climbed that he was a beloved badass. (This is where Bob would say, “Actually I was just an ass.”)

Bob didn’t leave behind his footprint on Earth; he left thousands of footprints. Raised in Croydon, outside Melbourne, Australia, Bob started running as a 12-year-old when his teacher, Roy Whitehead, sent him out to run in the rain. He showed talent (this is where Bob would say, “or stupidity”) and continued to run with the Richmond Harriers, and then at age 18, received a track scholarship to Long Beach State in the United States. He eventually transferred to the University of Texas at El Paso (this is where Bob would say, “Harvard on the border”) where he set two conference records in 1974, before graduating with a bachelor’s degree in business administration.

In 1976, he placed second at the Australian Olympic trials marathon, which was his first marathon. He won the Australian Marathon Championship in 1977 and represented Australia in the 1982 Brisbane Commonwealth Games. He ran 20 marathons in under 2:20, with several first place finishes to his credit, including the Dallas White Rock Marathon in 1980.

In 1981 he clocked his fastest marathon time at Grandma’s in 2:13:14. The following year he ran Boston Marathon, and while Bob told everyone how slow he ran that day, he still had a top-ten finish, sunburn and all. The best part of his Boston Marathon story wasn’t in gutting it out to finish, but in hobbling back to his hotel and coming face-to-face with a cleaning lady, who asked, “How did you do?” With a grin on his face, Bob said, “I finished ninth!” To which she replied in all seriousness, “Better luck next year.”

Bob never went back to run Boston, but he seized on his luck when he bought a struggling Dallas running store in 1995 and renamed it Run On! With his wife and business partner, Rebecca, the business grew to six stores and a race timing company before selling in 2012. He was regarded as a visionary in the retail running industry, setting an example for running stores all over the country. (Especially that time he took off running after thieves who fled the store with unpaid merchandise, shouting, “You’re never going to outrun me!”) His leadership style was one of authenticity, trust and empowerment. People were drawn to him because, in his sly way, he knew how to bring out the best in them.

Between hundreds of marathon clients he coached and as the co-author of How to Train For Your Bucket List Marathon, he poured his soul into helping others leave their footprint too. Bob had a huge heart for the running community and was adept at helping people reach their goals. What Bob’s running clients came to understand is that his coaching went beyond achieving a personal record. Bob taught people how to believe in themselves the way he believed in them, so they could go on to set and accomplish other life goals. (This is where Bob would say, “Shut up and run.”)

Despite being diagnosed with a brain tumor in February 2019 and the interminable treatment that followed, Bob continued to run, hike, bike and climb mountains near his home in Colorado Springs. Though his diagnosis influenced the way he embraced the rest of his life, which brought out a softer side to him.

Bob was an avid gardener, cook, and yogi; loyal to his canine companions, Marley, Rocket and Bullet; and always perturbed by United States’ continued use of the imperial measurement system.

Bob is preceded in death by parents, Neil and Yvonne. He is survived by sisters Jane (Peter) and Angela (Flo); brother, Jack; daughters Yvonne Winchester and LaRoux Wallace (Paul); and grandson, Jack. Bob leaves behind his best friend and wife, Rebecca (Salinas) Wallace, who is every bit a part of Bob’s story. If you want to know the kind of husband Bob was, he put toothpaste on her toothbrush every night. (This is where Bob would say, “She was my better half.”)

Bob had a sharp sense of humor paired with a kind of sweet gruffness that made anyone around him stand a little straighter. Those whose lives were touched by Robert Wallace no doubt feel an inexplicable emptiness without him in this world. How best to honor the man who taught you to fartlek? Certainly don’t say it with flowers. Instead, please consider donations to the Cheyenne Mountain Zoo, Humane Society of the Pikes Peak Region, or an animal rescue group of your choice. (This is where Bob would say, “Don’t be cheap.”)

(Below is Bob’s final writing, a Thank You to Roy Whitehead, his first running coach.)

(I realized I hadn’t thanked him. And that stopped me in mid stride.)

Because it rained in 1963, when I was 12, I was sent out with half of my classmates
to run in the rain because our gym would not hold the entire group.

Roy Whitehead, sent me out to run in the rain in 1963, because he
was our PE teacher and the gym was not big enough to hold the whole class.
And I ran, in the rain that day in 1963.

It was the first of many days that I ran.

Roy Whitehead made sure of that.

Roy Whitehead was my first coach.

Roy Whitehead coached me in school and started me running for Richmond Harriers.

Roy Whitehead arranged a scholarship for me to run in America.

Roy Whitehead didn’t know then what impact running would have on my life.
He didn’t ask me in 1963 if I wanted to go running in the rain. He just sent me
out in the rain with a bunch of other kids and off we went.

Off I went running.

Off to America to run.

When people were protesting the Vietnam War, I ran. Ban the Bomb, not the run.

I ran when there was no other meaning in my life.

I ran to make some meaning of my life.

I ran when there wasn’t a living to be made by running.

I ran and started a running store.

I ran and started a running event business.

I ran and they grew.

I ran and I sold them.

I retired and I ran.