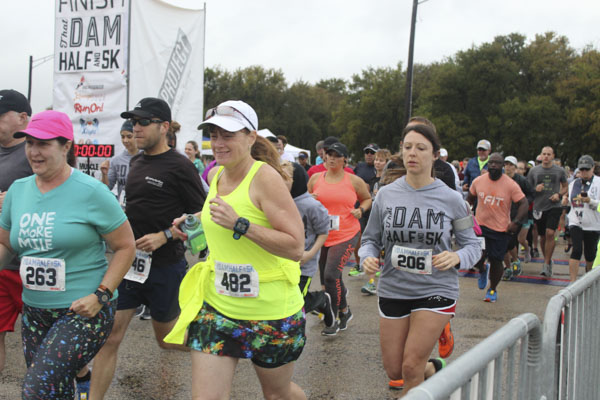 Marathon training season adds a whole new perspective to the way you do life which may have your non-runner friends asking, “What’s wrong with Mary?”

Has this happened to you? Someone in your life – perhaps a coworker or cousin – starts behaving in ways that seem uncharacteristically unusual. A formerly punctual cubical-mate begins sliding in a bit late. Is his hair wet? And, surely not, but it seems as though your sister-in-law went back for seconds, thirds, fourths (?!) at Thanksgiving.

It’s not your imagination. Fall is finally here and though it may feel like “autumn in name only” in North Texas, the recent equinox signals another lesser known time of year: Marathon Season.

Texas’ quadfectra of big city marathons take place in December (Dallas), January (Houston) and February (Austin and Cowtown). That’s to say nothing of smaller road races and iconic trail ultras such as Bryan-College Station, Brazos Bend, New Year’s Double, and Rocky Raccoon, which means distance runners will be getting on that grind well into 2020.

But, say you don’t have the requisite four-to-five hours to hear about a runner’s training plan, subtle injuries, or pacing quandaries. A straightforward ask is out of the question.

There are, however, other ways to tell if your coworker or distant relative is training for a marathon or merely suffering a nervous breakdown — not that those are mutually exclusive.

Tough call. It could be that your 9-to-5 is now a second stop after a 4 a.m. workout wakeup. Counterpoint: Many young parents suffer through restless nights taking toddler kicks against the back of their necks. In either case, it’s normal to nod off to the soothing clicks of a keyboard.

Definitely not a runner. Even if parenthood were to blame, as in the former example, new moms may not have the energy to care about trendy hues, but mani-pedis (i.e. an hour out of the house by herself) are common baby shower gifts.

On second inspection: Is that painted skin an attempt to hide a lost toenail? Is that one black nail a slightly different shade than the painted others? Pretty sneaky, marathon runner.

We hate to break it to you, but marathon training is not a silver bullet for weight loss. In fact, many first-timers wind up gaining weight as they learn to balance an athlete’s appetite with actual caloric output.

Whatever you do, do not ask your hungry, hungry sister-in-law if you’ll be getting a new niece or nephew come spring. In fact, keep all body comments (both positive and negative) off the table.

Say your co-worker’s white dress shirt is a tad sheer, prompting him to cover up with an oversized hoodie that’s far too informal for the workplace. Sounds like someone didn’t catch the mistake until he opened her gym bag for a pit-stop shower sesh on the way into the office.

Still, there are other scenarios where a person wouldn’t stay at home…

Maybe your SIL shows up for Sunday services wearing one blue shoe and one black shoe. To make matters worse, the left heel is clearly shorter than the right one. Getting dressed in the car. Classic runner move.

When that guy in your meeting does a wide-spread leg cross, does his creeping pant leg reveal that he is wearing, under his neutral gray suit, a pair of a dayglo calf panties?

Heaven forbid a person in your life experience true injury or pain. But most folks immediately reveal the source of such agony in conversation. Does your subject seem to not notice this recent ambulatory restriction? Do they regard tiptoeing on cramped calves as business as usual? They can’t see the inherent slapstick comedy of the straight-legged amble characteristic of a person with petrified hamstrings.

The clincher: Does this person keep a foam roller or lacrosse ball under his desk?

Does your SIL have all of the above and a ring of dirt around her sock line?