Pushing the pace into parenthood 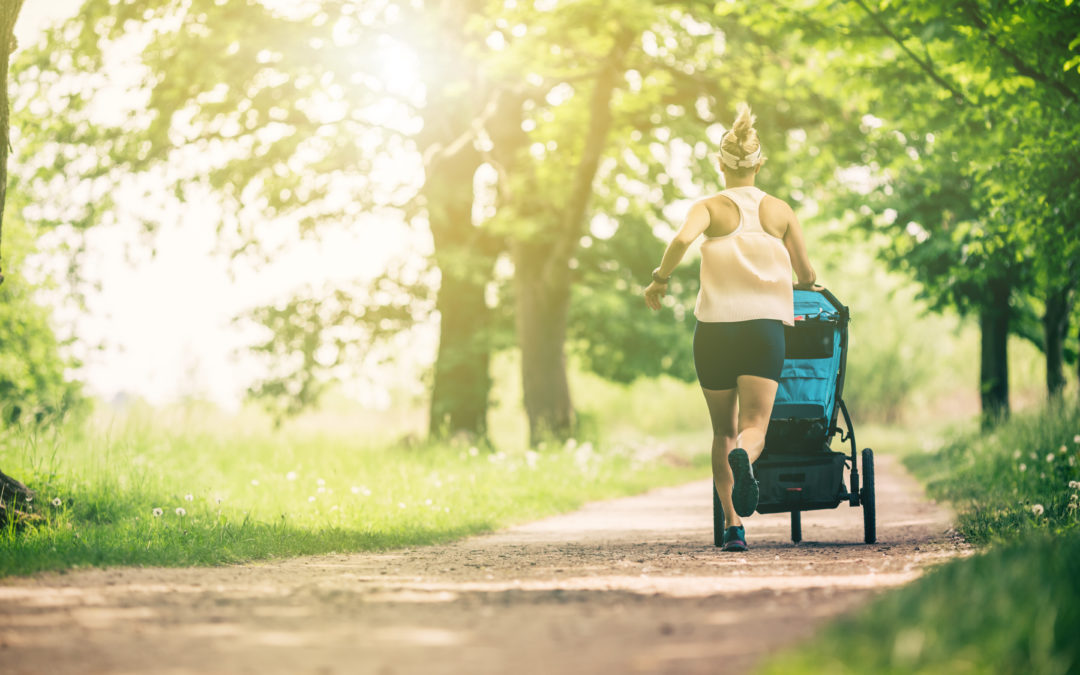 How having a baby can make you a grittier, smarter, and even faster runner

Editor’s note: Prior to this blog post’s publication, the Washington Post issued an expose detailing how hundreds of parents and infants have been injured using strollers manufactured prior to September 2015 by Britax, the makers of seemingly ubiquitous BOB equipment. Here is that original article and an NPR interview with its reporter. In response, Britax released a statement asserting that its strollers “are not defective and are safe when used as instructed.”  While we believe running strollers – particularly fixed wheel models – can, under many circumstances, be a useful tool for training, we support your best judgment in what is right for you and your family.

Picture this: During an awards ceremony following a local footrace, an announcer calls out names and the lightning-fast finish times of the overall winners. As competitors filter toward the podium, the woman taking the top spot accepts her trophy in one hand while lugging an adorable baby in the other.

Or, recall the time – and who hasn’t experienced this? – late in a tough race when the heavy sound of your own breathing was suddenly interrupted by the jaunty melody of the Daniel Tiger theme song. Within seconds, a man pushing a Mountain Buggy Terrain overtakes you on an incline.

Who are these people? Superhuman, for sure.

Perhaps not. Anyone who has casually browsed finish times for 30-40 age groups across both genders will likely note those categories’ stark competitiveness in relation to other demographics.

Part of this is likely due to biology. According to researchers, endurance athletes hit their physiological peaks somewhere around age 30. That, combined with a mental edge honed through the illuminating experiences of failing, tweaking, and growing throughout years of training, can contribute to formidable  performances in one’s thirties and forties.

Incidentally, 30-40 is also the age range where most Americans are choosing to start families. While it is true that more and more are delaying or opting out of parenthood altogether, census data published in 2017 found that more than 41 percent of households in the U.S. are raising children under age 18.

That means a sizeable portion of almost any recreational racing field, especially among those most competitive categories, is composed of women and men who somehow manage the difficult balance of child-rearing with professional careers, intimate partnerships and friendships, physical fitness, and other forms of self-care.

How do they do it?

We can’t answer that question indisputably. We can, however, confirm that having a baby does not mean hanging up your running shoes; nor does it mean your hot-rodding, hardware-claiming days are done. Here are our best suggestions on how to reframe or reclaim goals during the precious upheaval of young parenthood.

Finding time to train can be difficult for anyone, and starting or expanding a family only complicates already busy schedules. Whether you’re a full-time parent, work from home, or spend most of your days in an office, it is likely you will find yourself sometimes choosing between training with a stroller, on a treadmill, or not at all.

Choose to train. A slow run, a frustrating run, and a bad run are all better than no run. While many seasoned athletes may find it hard to motivate themselves for a mere handful of miles on the “dreadmill” or with a whining kiddo in tow, remember that the recommended daily requirement for adult fitness is just 30 minutes of moderate aerobic activity five days per week.

Zero times zero equals zero. But, half hour runs – meaningless though they may seem in the moment — add up. In fact, they can teach you to be a stronger, grittier, tougher athlete in the long run.

The best runners are resilient, and discipline to train through imperfect conditions imbues confidence. Take a cue from ultramarathon runners who not only expect things to go wrong on race day, but embrace small disasters as opportunities to test and display their mettle.

In other words: If you can push a stroller into a 15-mph wind on a humid day, imagine what you can do when you aren’t inhibited by what feels like a front loaded drag parachute.

Traditional training plans call for track- and hill-specific workouts that rely on particular pacing strategies, but undertaking a limit-pushing effort with a baby-on-board is clearly not advisable. If you are unable to set aside time for a couple of hard runs per week, obviously you shouldn’t try to hit lactate-threshold or anaerobic paces while pushing a stroller.

Safety first. Your windblown, wide-eyed child will thank you for refraining from risking a rollover. Pace and feel are fine metrics most days, but there are other ways to gauge a workout’s efficacy.

Triathlete and endurance coach Matt Fitzgerald is a go-to guru for using biofeedback to inform training, and his landmark book 80/20 details how to construct training plans based on your personal physiology.

How “personal”? One-size-fits-all formulas such as 180 minus your age are not effective for many runners, particularly those of smaller stature whose healthy heart rates tend to be higher across the board. Fitzgerald will walk you through how to conduct a lactate threshold field test or magic mile, and you can apply those results to include workout plans based on time and heart rate zones instead of miles and paces.

Take a tempo workout, for example. While you might not be hitting assumed goal paces during a stroller run, the increased effort of pushing, no matter how slowly, can easily work your body into a “zone 3” tempo heart rate. You may well feel like you are creeping along – and it can be tough to wrap your head around the process — but, remember that speed training is for the race, not right now.

Your body doesn’t know the difference between an 8-minute mile and a 10-minute one. But, as with variable weather conditions, your body does know how hard it is working in a given moment. The hard work will pay off on race day.

There are countless reasons to run for the pure joy of it. But many of us find it hard to resist the temptation of running down the next big goal. That might mean uncharted territory on longer distances and more challenging terrains or simply a faster finish at an established favorite event. Chasing personal records (PRs) is often a part of even the most recreational runner’s vocabulary.

Parenthood is a PR in and of itself. It can be difficult, lonely, frightening, joyous, enlightening, and fulfilling. Sometimes all in a single day.

Whether your body has changed dramatically due to pregnancy and childbirth or, for those who didn’t give birth but have given outstanding devotion through sleep deprivation and other wellness sacrifices, remember that what you’re doing is hard.

Returning to running can feel frustrating, so consider moving the goalposts and starting with “Postpartum PRs.” Even those who have run 100-mile races in the past can take pride in that first mile back on their feet. Recall the excitement of finishing that first-ever 5K without walking? Make that old goal new again.

With dedication (and, of course, medical supervision), it’s possible to mark through the racing bucket-list all over again – likely much more quickly than you think. Reclaiming those old accomplishments can feel exciting and new, and you might even find that those Postpartum PRs are one day more impressive than the old ones.

Live In Your Body

The human body is a remarkable machine. Few understand that truth better than endurance athletes. And yet, new parents often find themselves facing the fear that their body has irrevocably changed. For women who have experienced pregnancy and childbirth – which, for many, includes major abdominal surgery – it is both normal and unsettling to wonder whether your balance and strength will ever be the same. Partners and parents who didn’t carry their children also face emotional and physical doubts exacerbated through the overwhelming life change.

Be gentle with yourself when it comes to weight loss and strength rebuilding – both directly affect race performance, but neither dictates your worth. Treat yourself with the same level of kindness you want for your precious baby. And, grant that goodness to other parents in the trenches.

For so many of us, running is a method of tapping into a higher self. Keep at it, even when it feels hopeless, and especially when it feels hard. Your little ones are watching.

A fast, fit parent is one thing. But a patient, courageous parent is priceless.