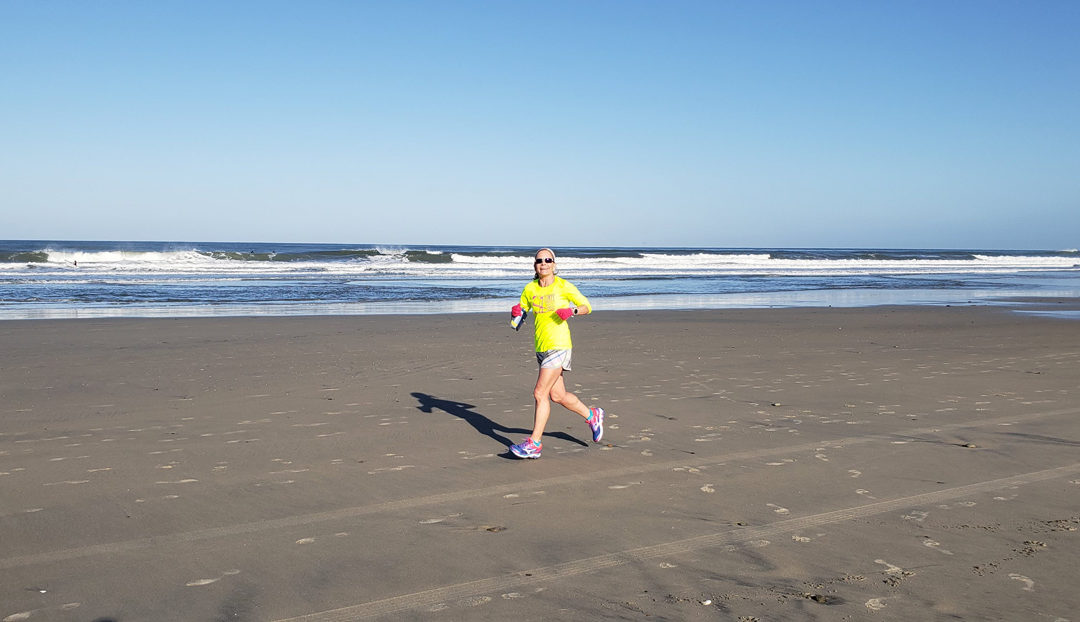 I had a hard time narrowing down my favorite summer running trips into a list of five, since we escape the Texas heat every single summer, but these are the five trips that stand out the most, and for various reasons. Perhaps this list will help you plan your next Texas summer escape?

1. Ouray, Colorado: When we travel to Colorado running isn’t a high priority due to altitude and time spent hiking instead. At nearly eight thousand feet Ouray was no exception. But…and people don’t believe me when I say this; there happened to be a race taking place that week-end! It was the Mt. Sneffels Marathon / Half Marathon, and the half marathon would start less than a half a mile from our hotel! I was too chicken and did not sign up, but my husband did and enjoyed it. The half marathon runs from the town of Ouray to the town of Ridgway, which is a 900-foot drop in elevation. The full marathon starts in Ridgway, runs up to Ouray and back down. Ouch! So no, I would not recommend the marathon to flat landers, but possibly the half marathon, and Ouray itself is a great little town to visit as well. Even if you don’t line up your visit with the race you can still get your runs in along the course, which is the less-traveled country road between the two towns. There are tons of hiking options around Ouray, and Telluride is less than an hour away as well.

2. Sydney, Australia: One of my favorite summer trips was during a winter in Dallas. I had a ten-day job assignment in Sydney in December, which is summer for the southern hemisphere. My hotel was across the street from the famous Sydney Opera House and the Royal Botanic Gardens, so every day after work I would get a quick run in the gardens and stretch on the steps of the Opera House. It was magical! Sunday, I needed to get more distance in (the gardens are beautiful but rather small for anything over six miles), so I took a taxi to Bondi beach. The rumor was the runners ran along the coast line south from Bondi Beach to Coogee Beach. (There was no social media back in those days!) This turned out to be a well-marked path with restrooms and fountains along the way. I came across an organized group of runners who invited me to join them. They were comprised of pentathletes, football players, triathletes, and even a cyclist who had ridden on the Motorola team during the Greg Lemond era. Apart from the accents in the conversations it was just like any social group here in the states. As we approached the finish in a nearby park everybody (men and women) joined hands. They gave me one of their club T shirts, from the City Tattersall’s Club, which originated in 1858! I recently googled current running groups in Sydney and did not come across them, but did find a group called the Sydney Striders. One of their photos showed them locked in arms, so could this be the same group? At any rate, Sydney was a great city to visit and was very “runner friendly” as well.

3. San Diego, California: I am partial to running in San Diego not because I am from there, but because they have near perfect weather year-round. It is never hard to find places to run in San Diego, regardless of where in the city you are staying. One of my favorite running places in San Diego is Solana beach and neighboring Torrey Pines beach, on the northern end of the city. If you start from Solana and run south to Torrey Pines it’s about four miles. When you get to the Torrey Pines State Natural Reserve you have the option to run up the 440-foot look-out. It is very steep and you may have to walk some of it, but it’s well worth it. You can then hike down to the beach from the visitor center at the top. Last year we ran the La Jolla Half Marathon, which starts at the Del Mar race track, circles the track, then heads south through Solana Beach to Torrey Pines, up the look-out, then onward to a magnificent finish at La Jolla Cove. I’ve done the race three times and every single time I say to myself that this is my absolute favorite race ever! But then again, every run in San Diego is pretty awesome, so you don’t need to sign up for a race to enjoy visiting and running in San Diego.

4. Southern Oregon: A couple of summers ago a team of twelve of us ran the Wild Rogue Relay in southern Oregon. It was over two hundred miles in total distance that started near Jacksonville, along a picturesque lake, and traveled through the Rogue Valley wine country, across the Cascade mountains, and to the Oregon coast. We continued south along the coast, finishing in the town of Brookings. Each runner ran three times, handing off to each other in succession to the finish. It was nothing short of spectacular. Our team finished around thirty-three hours or so. They only allowed about eighty-five teams total, which made for a much more relaxing relay than the famous Hood to Coast relay of northern Oregon, with over a thousand teams every year. I’ve done Hood to Coast six times and it’s a blast, but I have to say this is my favorite relay experience to date. After the relay we went to nearby Crater Lake and spent a few days in Ashland Oregon as well. Southern Oregon is just breathtakingly beautiful and well worth visiting, running or not.

5. Missoula Montana: This is a trip I have planned for this summer, so I haven’t ran it yet, but I am anticipating a great running experience paired with a camping excursion at Glacier National park.
The Missoula Marathon and Half Marathon is held on the last week-end of June. It’s combined with a Friday night beer run (untimed 5K), and a timed 5K Saturday morning. The marathon (which I am currently training for) is a point to point course that starts in a tiny town called Frenchtown, meanders through scenic countryside and finishes in downtown Missoula. They claim the courses are flat and fast. We shall see…They had me at Big Sky Brewing as a sponsor, regardless.

Training for fall marathons in the Texas heat is probably my second least favorite aspect of running. Being injured is clearly my least favorite, but I’m not going to go there…I try to plan an escape from the heat just before my marathon training “gets real”. I soak in the great weather and come back ready to suck it up and get through it. I’ve found that escapes during the peak training weeks has a somewhat negative effect on me, so I try to avoid them. Escaping to run a summer marathon though, is a notable exception. Our summers are just so dreadfully long that they certainly warrant escaping if at all possible!