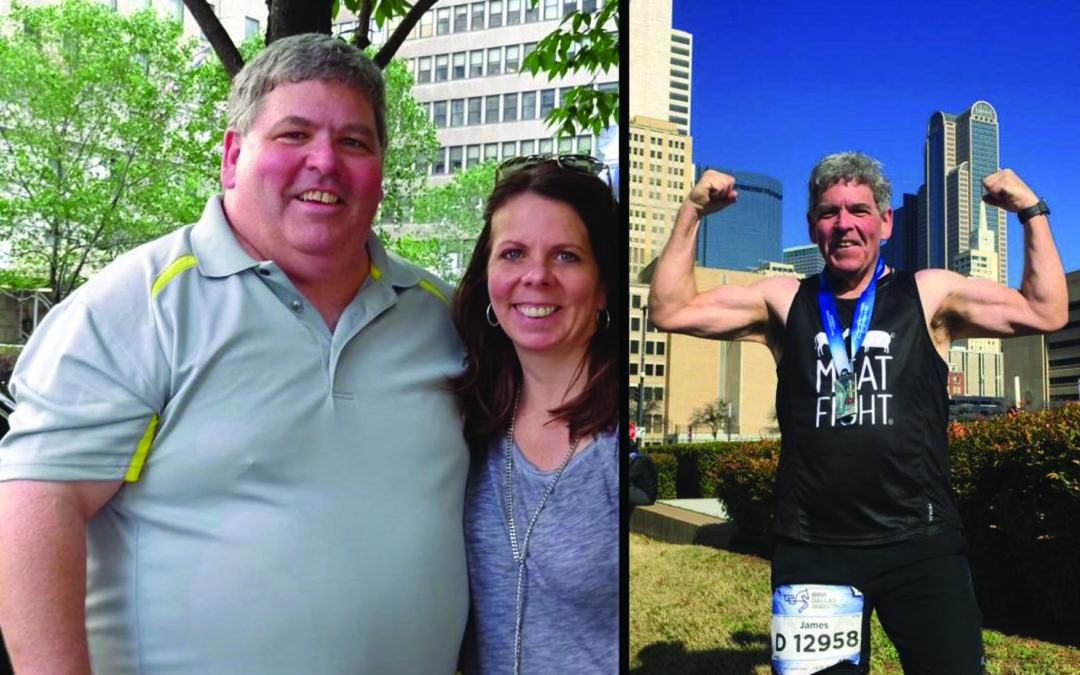 When I was a kid, my clothes came from the “husky” section of the store. I was never particularly athletic but I was always active and could do whatever my friends did, although usually not as fast or as easily. In high school, I was determined to get into better shape and joined the cross-country track team. That was a tough semester. After Christmas break, I dropped track rather than move to indoor running. And in December 1980, I ran last mile for 38 years.

High school turned to college, and college turned to work. But I was always on the go; working physically demanding jobs before graduation and then commuting from the Bronx into Manhattan, with almost three miles of working to and from the train each day. I wasn’t really fit, but I could do everything I wanted to do. But walking every day was my only regular exercise.

In 1992 I had the chance to move to Texas and try something new. I loved Texas. I quickly learned to appreciate the big food and drink and the much easier commute in my car. But as I progressed at work, I spent more nights and weekends in the office, and soon after that I got married and had kids. Working late meant eating out a lot and going to restaurants became a central family activity.

As the years passed, I slowed down even more. Driving instead of walking was steadily catching up to me. Between when I moved to Texas in 1992 and when I married in 1995, I gained 20 lbs. And every year, I added 3 or 4 more pounds. When my kids joined Scouts I was involved in all the activities, but I was having trouble keeping up with the kids and the other parents. Camping became a chore instead of a joy, and I would return home from a weekend in the woods exhausted, instead of refreshed.

With the weight came medical issues. Gout was first, followed by high blood pressure, then elevated cholesterol. At 42 I started having heart trouble and almost had a pacemaker implanted; I dodged that bullet but ended up needing a CPAP machine to help me breathe each night because I had developed sleep apnea.

With more weight it became harder it was to get around, and I spent more time sitting, eating and drinking. This cycle continued until I injured my knee and needed surgery. After that my activity really slowed down and I added about 30 pounds in three years. I was falling apart.

August 2016 the family and I visited Las Vegas on vacation. It was hot and we walked a lot, I was pretty worn out. We visited Zion National Park and I was determined to get out and do some hiking. We picked a short hike, less than two miles, but I had to stop several times and rest. As I sat in the shade on the side of a trail in that beautiful wilderness, I decided I needed to make some changes, or I might not last much longer. I wanted to see my kids grown and on their way in life, to enjoy retirement with the wife and grand-kids someday.

When I returned home, I consulted with doctors about a weight-loss procedure. I weighed in at 372. At 5’ 9” tall, that is a deadly BMI. To prepare I had required visits with a dietician and needed to lose weight through diet and exercise; this was to prove I could be successful after the surgery. I pushed myself hard, I started cycling, and during the run-up to surgery I lost 60 pounds. In May 2017 had my procedure and the weight dropped very quickly. By October that year I was down to 230 lbs and I completed my first 100 mile bike rally.

I joined a bicycle group and made many great friends. I learned the value of a support system to keep engaged in exercise. As my fitness slowing improved, I decided it was time to run again. I started out counting my paces – run 50, walk 50. After a week run 60, walk 40, etc. After I worked up to almost a mile I pulled a muscle and stopped for a few months. I pick up again in March of 2018 and finished a couple of 5Ks. But I hurt myself again.

I decided to get professional help and after scanning Facebook for recommendations I made an appointment at Luke’s Locker. The sales professional assigned to me was encouraging and helpful and she forcefully recruited me to visit her running group on Thursday night. I went home and tried out the shoes and the pain was gone. I figured this lady knew what she was talking about, so I stopped in on that next Thursday to see Bree Redwine and the Pint Striders.

It was intimidating. I am not a social butterfly and I was an out of shape, middle-aged, beginning runner hanging out with the group of fit young people all chatting about their lake loops and marathons and other amazing exploits. But Bree introduced me around and I made a friend or two that first night and I decided that I liked being there. Each week I tried (and still do try) to meet one new person. It’s an ever-changing group with people moving in and out, but after more than I year I still look forward to getting together with a group of people that are fun, friendly, and most importantly support each other and celebrate all our successes.

I hit my goal weight in May 2018 and having been maintaining ever since. The gout has gone, blood pressure and cholesterol are back to normal and I no longer have to use a breathing machine at night. I credit the support of my bike friends on Tuesday nights at with my bike friends, and my running friends on Thursday nights at Pint Striders. Getting together is more than exercise, it is fellowship and camaraderie, and as you can tell by the names, a little beer too. I’ve added other groups since then and I have made friends in each one. Countless group runs, rides, and other events have taken place over the last two years, and I’ve laughed and had fun with friends at every one of them.

If all goes according to plan, by year end, I’ll complete my first marathon in December. Not bad for someone who hadn’t run a mile since 1980. And in November I am traveling back to Las Vegas with the Pint Striders – a changed man since my last visit. A man changed, for the better, by the people around him. Some people can do it on their own, others need help. If you are having trouble on your own, find some like-minded people and change your life for the better.