An Interview with the Dash Down Greenville Leprechaun 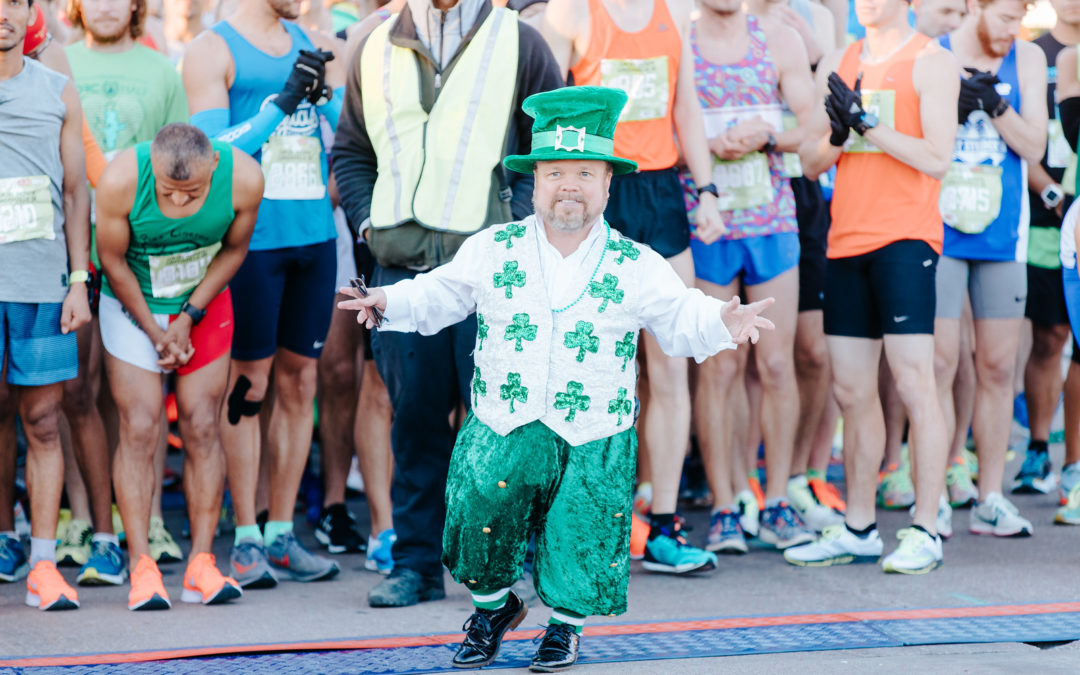 Perhaps it’s of little surprise, given the source, but the Wikipedia entry for Leprechaun is only partially correct. In the Wiki entry, a Leprechaun is described as “little bearded men, wearing a coat and hat, who partake in mischief. So far, so good, right? Mischief during various St. Patrick’s Day celebrations is sort of the norm, after all.

But the Wiki entry continues, saying Leprechauns “are solitary creatures who spend their time making and mending shoes and have a hidden pot of gold at the end of the rainbow.” Obviously, this is an egregious error. That, or the sad sort of person who wrote this specific Wikipedia entry hasn’t had the pleasure of participating in the annual Dash Down Greenville, now celebrating its 25th year in Dallas.

For over 10 years, Leprechaun Jason Owens has been the opposite of “solitary” for race revelers filling Greenville Avenue before Dallas’ annual parade. Posing, strutting, bounding, mugging, chatting and more, Owens has been a tirelessly energetic cheerleader for runners and partiers alike. A solitary sort, he is not.

Since he’s so busy on race day, we thought it would be a great idea to catch up with the Dash Down Greenville Leprechaun and get a feel for what he’s all about!

Run Project: St. Patrick’s Day is a busy time for you, I am sure. Do you have to negotiate time zones the way Santa Claus does in order to visit all the partiers across the world or are you a Dallas-specific leprechaun?

The Dash Down Greenville Leprechaun: Trust me, it is hard trying to negotiate time zones throughout this entire world for St. Patrick’s Day. In-fact I do run into Santa Claus on occasion, the only thing about that is he is always trying to get me to go to work for him. I have explained to him on numerous times, “I have no time for Christmas, Santa! I love his holiday, but someone has to do what I do.”

RP: What are your primary duties as the Dash Down Greenville Leprechaun?

DDGL: My primary duties as the Dash Down Greenville Leprechaun is making sure people are having a really great time.

RP: How long have you been “out” as a Leprechaun?

DDGL: I have been Leprechauning for the DDG for over 10 years now, not exact on the number of years because I do have a short memory, no pun intended.

DDGL: To that question, “My lips are sealed.”

RP: Do you run in the 5K, or are your Leprechaun talents more of use in a hosting role rather than a runner role?

DDGL: Do I run in the 5K? If I ran in the 5K, by the time I crossed the finish line it would be time to have the next years Dash Down Greenville’s 5K. So that’s a big no!

RP: If you were forced to pick only one of the following items to keep and use forever, which would it be and why? A. Lucky Charms cereal, B. Irish Spring soap, or C. Guinness Stout beer.

DDGL: It would be B, simply due to the fact all the pictures that I am in on race day with all the participants, may appreciate the fact that I smell Irish Clean. I also strongly recommend the Irish Spring soap for some of the participants, if you catch my smell.

RP: Greenville Avenue is a pretty fun place on race day. Does anyone ever try to trick you into telling them where the pot o’ gold is?

DDGL: Great Question! People are always trying to get me to tell them where my pot o’ gold is hidden. (Hint) You would be surprised, its closer than you think. I always stay in the vicinity of it, and I will not let it get out of my sight.

RP: You must be exhausted after St. Patrick’s Day weekend. What do you do to unwind when April and May roll around?

DDGL: After all the St. Paddy’s Day festivities are completed in the US, I have very little time for rest, until I have to take off on my rainbow to my next St. Paddy’s Day events. Like they say, “it’s always 5 o’clock somewhere,” well, it’s also St. Paddy’s Day somewhere. However, I love to take in some warm sun on the beaches of the west coast.